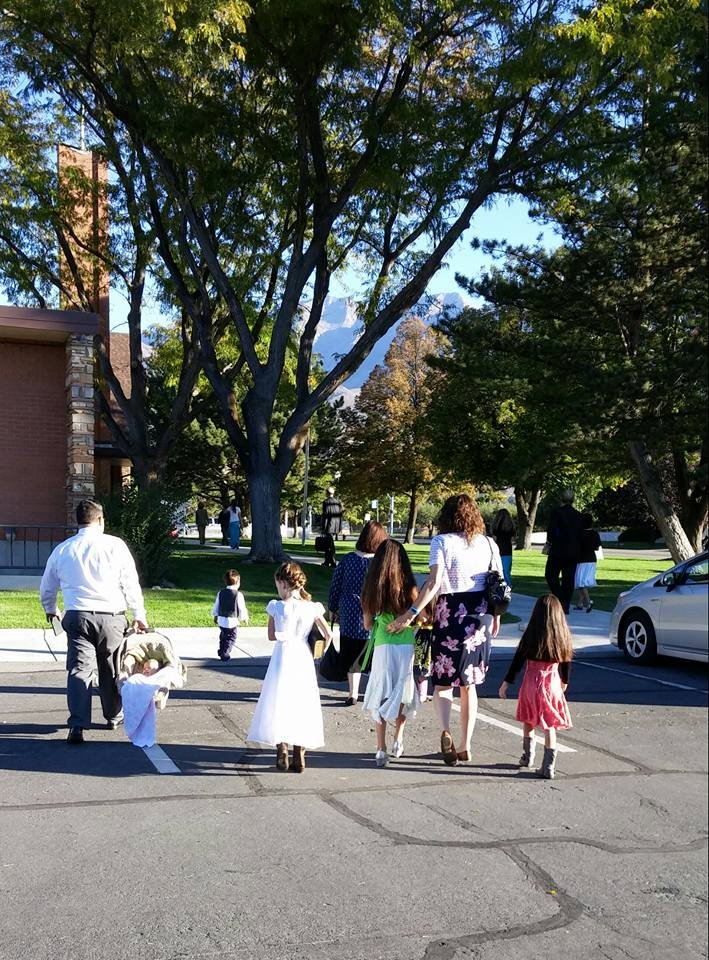 As with my son Chris, and my daughter in law Mary, shown here attending church with their family in the Utah Valley, the Church of Jesus Christ of Latter Day Saints is known as a family church, giving heed to the first of God’s commandments, as recorded in Genesis, “And God blessed them, and God said unto them, Be fruitful, and multiply, and replenish the earth…” (1)

God has never given a commandment save He bless those who in righteousness, obey His commandments. In righteousness? Yes, in righteousness, meaning obedience to ALL His commands, with special emphasis on the laws of morality and chastity. For the obedient, He provides a way, as for instance, on how to care for a large family. He blesses righteous parents, giving answer to their prayers regarding that most sacred of institutions, the family.

For the sustenance of the family, He gave the law of the tithe. We read in Malachi, “Bring ye all the tithes into the storehouse, that there may be meat in mine house, and prove me now herewith, saith the LORD of hosts, if I will not open you the windows of heaven, and pour you out a blessing, that there shall not be room enough to receive it.” (2) Ten percent of all we bring in through our labors is His, and in return He will provide all we need for our sustenance.

But let us go back to that first commandment, “to be fruitful and multiply.” A few decades ago, supposed wise men of education rose up to declare and foster, among other things, that the earth would soon be overpopulated, that women deserved the right to pursue careers, leaving children to be tended by others outside the family, that two parents working would lead to a better lifestyle, and that children could wait. Somewhere along the line, two was the number settled on, hopefully one boy and one girl as a maximum number of children for a couple. What followed is that today, some couples in pursuit of a hedonistic lifestyle, (living to pursue pleasure) settle on one or none. This was especially true in the countries known as the European Union. Be fruitful and multiply? Please! What does God know?

The results of nations disobeying God’s commands? Quoting from an article published in 2008, we read, “Europe is a dying continent…an acute failure to produce the next generation has created a looming demographic crisis…According to research by both the CIA and the UN, every single member of the European Union has a birthrate significantly below the replacement rate of 2.1 births per woman…Germany had a birthrate of 1.36 children per woman in 2007, and Spain and Italy had birthrates of 1.29…The average birthrate of the European Union as a whole is approximately 1.5 per woman…and that number is inflated…No civilization has ever recovered from such a population decline, and never before had such a decline been entirely voluntary…Europeans are not becoming less fertile as a consequence of war, or famine, or disease, but rather as a consequence of their Western consumerist lifestyle…European civilization is in the middle of committing voluntary demographic suicide…violating fundamental Darwinist principles for gene propagation…within a century, Europe will cease to be a White, Christian continent.” (3)

The article was written in 2008. The author could not have forseen the hundreds of thousands of Muslim immigrants pouring into Europe today. Surely there is safety in obeying the Lord’s commands! The price we pay for continued disobedience can be devastating. Except the Lord intervene, given the high birthrate of the immigrants, Europe as we know it will disappear within a generation.

The Lord decries the so called wisdom of the modern day intellectuals with their man made and uninspired theories about the future of mankind. “O the vainness, and the frailties, and the foolishness of men! When they are learned they think they are wise, and they hearken not unto the counsel of God, for they set it aside, supposing they know of themselves, wherefore, their wisdom is foolishness and it profiteth them not. And they shall perish. (4)