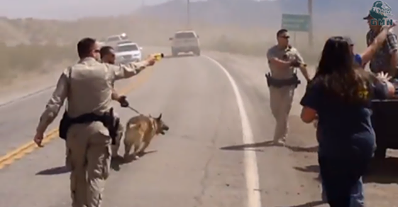 There is something very disconcerting about the above scene, which you may view in video via google of the following: “Must See Video! Feds Assault Bundy Ranch Protesters With Tasers And K9 Dogs | Alternative” Anyone defending the Bureau of Land Management’s actions in the above fracas will suggest that no one was hurt. No, not yet. But the government is terribly out of line here. It is an outrage.

Why are so many armed federal officers in a lonely, far off corner of very American Nevada? And why the police dogs? This is not about a confrontation with members of the notorious MS-13 Gang in the barrios of Los Angeles, or the Klu Klux Klan somewhere in Mississippi. What makes this picture so disturbing is that it is a confrontation between local, law abiding, American citizens, and large numbers of armed government agents shipped in from outside of Nevada. Further, the millions of dollars expended in this outrageous action courtesy of the taxpayer is unconscionable.

In Clark County Nevada, Rancher Cliven Bundy has run his cattle on government land for decades. Such is a common practice in the Western United States. I recall as a boy in the 1950’s hearing Mormon missionaries coming from that area recounting stories of their fathers and grandfathers running cattle on government land. Government land? Their fathers and grandfathers and great grandfathers broke sod on that land before it was ever the United States of America, and while it was still Mexican territory. In 1850 the first White settlement in Nevada was Mormon Station, which name was later changed to Genoa. One would argue that “government land” is the property of the American citizens living in that area. Who is the government to interfere? Cliven Bundy’s  Mormon father, grandfather, and great grandfather, were running cattle there since the 1870’s. His resentment against what he considers onerous government is understandable.

Right or wrong, in 1993 Bundy refused to continue paying fees to the Bureau of Land Management for grazing rights on the land. The government countered in 1998 by declaring the land a protected habitat for an endangered species, the desert tortoise. As always the government is suspect. Consider the irony of the following newspaper headline of August 26, 2013: “Government plans to euthanize hundreds of threatened desert tortoises it was supposed to protect”.

It is  time that the citizenry of this country realize and stand up against the bullying tactics engendered by environmentalist policies wherever, and whenever they are applied. Regarding Cliven Bundy, we read,  “Environmentalist are praising the government’s forceful actions, which are being taken to protect the “desert tortoise. We’re heartened and thankful that the agencies are finally living up to their stewardship duty,” said Rob Mrowka, a Nevada-based senior scientist with the Center for Biological Diversity. “The Gold Butte area has been officially designated as critical habitat for threatened tortoises — meaning the area is essential to their long-term survival as a species.” (re article “Armed federal agents surround Nevada ranch in latest standoff”)

The argument set forth by environmentalists is that the Bundy cattle are a threat to the desert tortoise. A doubtful argument, but consider this; if it is not the tortoise, one can find another species of animal or plant to throw into the mix as endangered, and any attempt to disprove the claim will take years, and hundreds of thousands of dollars, while the matter is tied up in litigation.  The term “endangered species” is usually nothing more than tyranny, wherein a small minority of malcontents dictate their specious reasoning and cease and desist orders to the rest of us, those of the majority. Rather than banding together (as are the good citizens of Clark County) and declaring “enough is enough!” we let them get away with it.

This army of law enforcement in Clark County is an ominous show of government force, all gathered to do battle with one rancher and his family. The dogs, which if employed are vicious, and certainly have no place there. Such an array of force by the almighty government against an otherwise law abiding citizen of these United States is oppression, the tool of despots and dictators. It has no place in these United States of America, particularly when one is minded of the fact that tens of thousands of American fighting men have given their lives to free the citizens of other countries from the rule of tyrants employing like force against their citizenry.

Pressure needs be applied to Republican Governor Brian Sandoval of Nevada, to stand behind the citizens of Clark County. Although he has issued the following message, he can do more. Press release by Governor Sandoval 8 April 2014:

“Most disturbing to me is the BLM’s establishment of a ‘First Amendment Area’ that tramples upon Nevadans’ fundamental rights under the U.S. Constitution. To that end, I have advised the BLM that such conduct is offensive to me and countless others and that the ‘First Amendment Area’ should be dismantled immediately,” he said. “No cow justifies the atmosphere of intimidation which currently exists nor the limitation of constitutional rights that are sacred to all Nevadans. The BLM needs to reconsider its approach to this matter and act accordingly.”

That is a good start Governor Sandoval, but you can do more. A letter (released to the press) from you to President Obama telling him to remove his goons from Clark County Nevada is in order. It will serve to showcase another addition to Mr Obama’s growing list of “government on citizen” outrages. Armed government agents, snipers, and roadblocks, have no place in Clark County or anywhere else in this country, wherein the freedom of movement or speech of law abiding citizens is restricted. The reader may encourage Governor Sandoval by reaching him at the following: Carson City State Capitol Building 101 N. Carson Street Carson City, NV 89701. Phone: (775) 684-5670. Fax: (775) 684-5683, or, google his name, which will bring up a form which will allow e-mail access to him.

As a patriotic citizen of this great country, I am alarmed. Have we not come to the time spoken of in prophetic tone by Founding Father Samuel Adams?  He wrote, “If ever time should come, when vain and aspiring men shall possess the highest seats in Government, our country will stand in need of its experienced patriots to prevent its ruin.” That time has arrived.