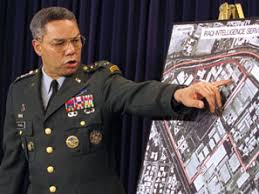 When I was a kid, I was scared to death of Raul and Rosalio, the two bullies who made life miserable for me at the school bus stop morning after morning. I tried hard to appease them, but the more I caved, the worse things got. The more I bowed to their demands, the more difficult they became. I dreaded going to the bus stop. Then came the morning that Raul made my little brother his victim. Righteous indignation welled up inside me, and that morning I whipped Raul. When I got through with him, I whipped Rosalio, who was by now completely cowed.

I am making a point. I have, in the course of my life learned a few things. Bullies and tyrants scorn weaklings. They can smell fear in their victims, and such fear impels them to greater abuse. They respect but one thing; force, or the threat of force in any of its forms.

Great leaders arrive on the precipice of history in moments of great peril to their country.  Such is that moment in history for this nation. Great leaders have been schooled through the harshest lessons life can dole out. Rarely are they fooled by anyone. They are students of, and understand human nature. They can smell a rat in human form.

Had Colin Powell decided to run for president in 2008, he would have been unanimously elected, by Republican, Democrat, or Independent voters. Would that he had run!

Can anyone imagine General Powell servilely bowing to dictators? Can one imagine Colin Powell tip toeing around the Iran situation? Can anyone imagine him making Benjamin Netanyahu sit outside his office like a lesser being? One can instead, see him bolstering Israel, supporting them behind the scenes, in a military strike against Iran’s nuclear facilities some four years past.

Can anyone imagine Colin Powell, soldier that he is, ordering a premature withdrawal from Iraq, after the sacrifice there of so many American lives?

Colin Powell is an honorable man. His courage in the line of fire is without dispute. As a diplomat, in the presence of other world leaders, Powell would with confidence assume the role of leader. He would show humility, but would at no time entertain any doubt about his superiority. There would be no perception of weakness from a Colin Powell.

I paraphrase: we are coming to times that will try men’s souls. Wise, honorable, and courageous leaders are needed. Therefore, it behooves every citizen to choose wisely the candidates they elect to office. God fearing men and women are needed, for much is at stake. Wake up, citizens of America. Our nation is in peril, and when America, through its leaders shows weakness, the rest of the world suffers. Wake up!

Oh, beautiful for heroes proved
In liberating strife,
Who more than self their country loved,
And mercy more than life!
America! America!
May God thy gold refine,
Till all success be nobleness,
And ev’ry gain divine.