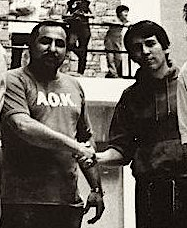 The police radio frequency came alive, quickly filled with excited and angry voices, that Summer night in 1968. A chase was in progress, and the reason soon became apparent. One of our North Austin patrolmen had stopped a ’56 Chevy, and the five occupants had spilled out, with one of them pulling a .45 caliber auto and firing a round at the officer’s feet. After disarming him, they roughed him up, leaving him on the side of the road. He had recognized two of them as ex cons, Dickie Evans and Lonnie Sumner, both White, from somewhere in North Austin.

At age 23, I was beginning my second of eight years with the Austin Police Department. Joe Alvarado was riding with me that night, as he had been doing on most weekends since I began karate training with him the year before. Things were different in those days. For one thing, karate was a foreign word, known to very few. Judo yes, muay thai and jiujitsu, totally unknown. IH 35, but nine years old at the time, had been configured to serve as a dividing line between Anglo Austin and the rest of the population. East of that line, from E 7th Street south to the Colorado River was completely Mexican American, all the way into Montopolis. East of that line, from E 7th Street north to E 19th (now MLK), was an entirely Black population. East of Airport Boulevard was divided into pockets of both races. This then made up East Austin, an area most police officers avoided, or worked in stretches of time no longer than an obligatory three months.

In that year I was one of only seven Mexican American officers and eight Blacks on the department. Although Joe Alvarado rode with me frequently, he wasn’t well liked by police officers. It was at the moment, a racial thing. For instance, there was the late night prowler call to a house on Garden Street. Handing Joe my nightstick, I sent him around one side of the house while I began to walk around the other side, just as other officers were pulling up. I made it around the house in time to find Officer Robert Bachman pointing his revolver at Joe, dressed in his dark navy pea coat and black hat. I was furious! I told Bachman to holster his revolver or I’d make him eat it. He angrily holstered it.

Now on this particular Summer night, Joe and I were at the jail, where I was interpreting for an illegaI. I was upset to be wasting my time in the jail interpreting for someone else’s prisoner when there was a chase going on, particularly given the circumstances of the chase. Every available police vehicle, it seemed from every part of the city, had headed north to join in the chase and I was stuck interpreting! In the jail we could hear that chase going on all over North Austin, and then it began coming south. That little Chevy was flat outrunning our Fords! Then it disappeared, only to resurface again, before other units, and then losing them as well. When I realized, after some ten minutes, that the chase wasn’t going to be over any time soon, I turned to the jailing personnel. “Get someone else to do this! Come on Joe, lets go see if we can get us that Chevy!” Slim chance, thought I, but I wanted to be in the running.

Yes, I wanted into this race! I felt I could catch him where the others could not. My police car, like the rest of the police vehicles used by the AustPD, was a 1968 Ford Custom sedan. These cars packed a big V8 engine, with 390 cubic inches of power. I felt my particular car would make a difference in chasing that little Chevy, if only I was lucky enough to sight it.

The difference between my car and the police cars which had so far gotten behind the little Chevy, was that mine was an East Austin Unit. There were, at the time, four cars which worked East Austin, and they were different from the rest, specifically because they were East Austin units, where things got particulary hot often. Getting to a call fast was extremely important.

The East Austin units were fast because the men who drove them kept them running fast, unlike those in the vehicles working the more placid parts of the city. On the day shift, I would begin my shift by taking my car out to the little traveled and newly constructed Ed Bluestein Blvd, to blow it out. From a stand still, I would floor board the accelerator and rapidly pick up speed, until burying the needle, which was at 140 mph. (In retrospect, I shudder at the risks taken by a much younger me) This way, the fellows who drove it during the afternoon 3-11 shift, and the 11-7 night shift, would be able to rely on it to be up to max speed within seconds, without the coughs, stutters, and sputtering the other units were at the moment experiencing, putting them at a distinct advantage to that very fast ’56 Chevy. I wanted to get behind that little Chevie, which had so far outrun every Ford it had encountered.

After informing the booking desk people to find another interpreter, I ran to my unit with Joe right behind me. I floor boarded my unit onto IH 35, and wouldn’t you know it, that ’56 Chevy came blazing by, now headed back north! We were doing 100 mph and climbing, when the Chevy turned off at the Airport exit. (I had lost my chance to see what my Ford could do against the Chevy on the straight away!) But I was pushing him, and far ahead of us, they lost it on the curve. Now I had him!

I ran my unit right up against the driver’s side. I jumped out and ran over to the passenger side. You have to understand that emotions were high, (hardly describes the adrenalin flow) and besides, I thought there was a .45 loose somewhere in that vehicle. I

Joe came around behind me, but I was on top of both of those in the front seat, and not far from blowing Dickie away. Joe was thinking, and when he saw what was happening, he quickly jumped into my unit and backed it up. (I was surprised, for this was the first storm we had gotten into together, and I wasn’t sure how he’d react) He then pulled and yanked open the driver’s door of the Chevy, forcing it open, and Dicky and I tumbled out onto the street with me on top of him. He was smart enough to stay down. As the others, to include Lonnie Sumners. who was in the back seat, began piling out of the Chevy, I hollered to Joe to use my stick and drop the passenger. He paused, but when I hollered again, he buried the point of the stick, and the fellow dropped, gasping for air.

Where was the .45? “Drop ’em all Joe!” I hit the third guy, and he went down. Joe followed suit with the fourth guy. Only one was left standing, a Mexican American. (I found this strange as the two races were not yet mixing) “Drop him Joe!” I yelled. The man pleaded, “Indio, (as Joe Alvarado was known in East Austin) tu me conoces! You know me. Indio, tu me conoces! You know me man!”

I hollered again, “Drop him, Joe!” I could see Joe was having a hard time taking down an acquaintance, particularly one who called him by name, and I understood that. I had no such compunctions. I knocked the man off his feet.

The first unit of many units to arrive was manned by the very tough Jimmy Baker, who helped break me in as a rookie. Seeing five guys laying all over the roadway, he exclaimed, “H___! Man, what happened here?

We never found the .45. Several years later, when I was relagated to South Austin by orders of Chief R. A. Miles, my then immediate Supervisor, Sergeant Robert Polivka and several North Austin officers pulled over a vehicle occupied by Lonnie Sumners. Polivka had no use for me, none whatsoever, but he had Lonnie Sumner stopped. Polivka was afraid of him, but with several officers around him, I was surprised to hear him address me over the radio, “Lopez, we got Lonnie Sumners stopped up here.” And? “I need you to get up here. Yeah, I’m giving you permission to leave your district.”

So I headed north. There, just off Highway 290, I found Lonnie Sumners, surrounded by several officers and Sergeant Polivka. Lonnie was calmly leaning up against the hood of his car, cooly surveying the situation. I couldn’t help but admire him. Lonnie was mucho hombre…all man.

Polivka turned to me as I walked up. “Here he is, Lopez, Lonnie Sumner!” He wanted me to take him out! They had nothing on him. Here in broad daylight, some bad policing was going down, perpetuated by the spineless Polivka. Facing him was a very tough, and much to be admired adversary, at the mercy of not one, but several cops. I didn’t like the odds, the way they were stacked againt Lonnie, and for what? Well, I was going to pop that bubble, and make Polivka look foolish in the process.

“How are you, Lonnie?” I asked, reaching out my hand. He took it. “Just fine, Mr. Lopez…well, that depends, I guess…” Smiling, I replied, “you’ll get no flack from me, Lonnie.” I turned to face Polivka. “Sergeant, you have nothing on this man. Nothing! Don’t you ever call me again to do your dirty work.” With that I turned my back on him, got in my car, and drove away, and Lonnie soon followed. That was the last time I ever saw Lonnie Sumners. We parted amicably. Dickie Evans I believe, was back in the joint.

Occasionally one ran into a Bob Polivka, but they were the exception. The differences between Bob Polivka and myself came to a head one night when I extended an invitation to him to come settle our differences..He was a no show.

Of another officer, (who incidently, became a student of Joe Alvarado) my partner, Jerry Day, one of the best who ever served with APD, said to me many years later, “That fellow cost you fifteen days without pay, and Tom Graham his job.” Tom Graham, a very tough 2nd Dan Judoka and detective, had mentored me into the position of defensive tactics instructor over his own Brown Belt student. Tom would have appreciated my handling of the situation involving Polivka and Lonnie Sumners, for the same reason he backed me over his Brown Belt student. Between me and him, as between me and Lonnie Sumners (despite our earlier differences) there was an important element…mutual respect.