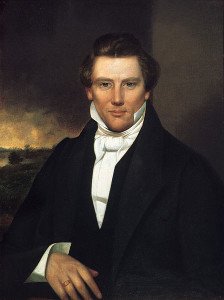 It was not a man of learning and advanced education in the religious philosophies of men, but rather a pure, but untutored, and unlearned, boy of fifteen, who on the morning of a beautiful spring day in 1820 retired to a nearby woods to pray. In what he described as glorious light, brighter in intensity than the noon day sun, he saw in vision “…two Personages, whose brightness and glory defy all description, standing above me in the air. One of them spake unto me by name and said, pointing to the other, This is My Beloved Son. Hear Him!”
Thinking the man would rejoice with him, he confided in a Methodist Preacher. He received instead a stern rebuke, and a warning that there was no such thing as visions or revelations anymore, for such things had ceased with the apostles of old. How narrow a view! God, and visions, and revelations, are needed more than ever before in the history of the world. Is He to hide himself from man at such a time?
No, God has not hidden himself from good men and women who seek him, but the pastor was correct in the sense that a fullness, or the Gospel of Jesus Christ in its entirety, and the authority held by the apostles to lead His Church, had ceased with their death, for such an apostasy or falling away had been prophesied by Paul, among others. “For I know this, that after my departing shall grievous wolves enter in among you, not sparing the flock. Also of your own selves shall men arise, speaking perverse things, to draw away disciples after them. Therefore watch, and remember, that by the space of three years I ceased not to warn every one night and day with tears.” (Acts 20:29-31)
During the intervening centuries between the death of the apostles and the restoration, many were the good men and women who lived the teachings of Jesus Christ in the best way they knew how, and blessed of the Lord are they, for no blessing will be withheld from them. Indeed, we have reason to be grateful for those heroes and martyrs who paved the way for the restoration, many of them giving their lives for the right to religious freedom, as well as making available to the world the Holy Bible as we have it today. Among these are John Wycliffe, John Huss, Martin Luther, Ann Askew, William Tyndale, Nicholas Ridley, and Hugh Latimer. Ann Askew was tortured on the rack and then burned alive. Tyndale was strangled and then burned. Wycliffe and Huss, as well as the two Christ like, and courageous, Bishops of the Church of England, Nicholas Ridley and Hugh Latimer, were burned at the stake. To them, and others like them, much is owed for their awful sacrifices in paving the way for a complete restoration of the Church of Jesus Christ in its fullness.
Of such a restoration did John the Revelator prophesy, “And I saw another angel fly in the midst of heaven, having the everlasting gospel to preach unto them that dwell on the earth, and to every nation, and kindred, and tongue, and people, saying with a loud voice, Fear God, and give glory to him; for the hour of his judgment is come: and worship him that made heaven, and earth, and the sea, and the fountains of waters.” (Revelations 14: 6, 7) In fulfillment of this prophecy, the angel Moroni and other angelic visitors came to Joseph Smith, bestowing upon him additional powers and blessings, to include, in due time, the authority and Priesthood of God, “the keys of the kingdom,” or apostolic power to reestablish the Lord’s Church in its fullness and power. Joseph brought to light other books of scriptures, ancient and modern, as additional witnesses of Jesus Christ. Through one of these, the Doctrine and Covenants, the Lord declared unto Joseph, “…this generation shall have my word through you,” (D & C 5: 10) and of the Book of Mormon, the Lord stated, “And he has translated the book, even that part which I have commanded him, and as your Lord and your God liveth it is true.” (D & C 17: 6)


Like the prophets of old, Joseph Smith paid a price for his testimony. In the span of his brief life of 38 and a half years, he was beaten, tarred and feathered, and left for dead; on the basis of scurrilous lies and falsehoods he was hailed to court more than 200 times but never found guilty. He was falsely accused and jailed 42 times. Indeed, while languishing in a filthy pit for the space of six months under the most horrible conditions, the Lord gave him comfort, saying, “If thou art called to pass through tribulations…if thou art accused with all manner of false accusations; if thine enemies fall upon thee; if they tear thee from the society of thy father and mother and brethren and sisters; and if with a drawn sword thine enemies tear thee from the bosom of thy wife and of thine offspring…and thou be dragged to prison, and thine enemies prowl around thee like wolves for the blood of the lamb; And if thou shouldst be cast in the pit or into the hands of murderers, and the sentence of death passed upon thee…if the very jaws of hell shall gape open the mouth wide after thee, know thou, my son, that all these things shall give thee experience, and shall be for thy good. The Son of Man hath descended below them all. Art thou greater than He?” (D & C 122: 5-9)
There came, in those days of intense persecution, the exterminating order against the Mormons issued by Governor Liliburn W. Boggs of the State of Missouri dated 27 October 1838. What other religion has suffered so at the hands of government? But Joseph Smith was its leader, and his blood was required. Later, despite having been promised safe passage by Governor Thomas Ford of Illinois, two or three days prior to going up to Carthage to deliver himself up to the pretended requirements of the law, Joseph declared, “I am going like a lamb to the slaughter; but I am calm as a summer’s morning; I have a conscience void of offense towards God, and towards all men. I SHALL DIE INNOCENT, AND IT SHALL YET BE SAID OF ME…HE WAS MURDERED IN COLD BLOOD.”
At about 5:00 p.m., on the 27th of June, 1844, despite the governor’s promise of safety, Joseph Smith and his brother Hyrum were shot in the Carthage Illinois jail, by an armed mob, faces painted black, of from 150 to 200 persons. Hyrum was shot first, exclaiming, “I am a dead man!” Joseph leaped from a window, and was shot dead in the attempt, exclaiming, O Lord my God!” Both were shot again after they were dead, to assure the deed.
I am but one of millions who proclaim Joseph Smith a prophet of God. The profundity and scope of his labors upon the earth shall be fully measured at a later day. Joseph Smith, sealed his testimony with his blood, like unto Stephen of old, who, “… being full of the Holy Ghost, looked up steadfastly into heaven, and saw the glory of God, and Jesus standing on the right hand of God, And said, Behold, I see the heavens opened, and the Son of Man standing on the right hand of God… And they stoned Stephen, calling upon God, and saying, Lord Jesus, receive my spirit …” (Acts 7: 55, 56, 59)
I testify that the glorious first vision, when the veil was parted for Joseph Smith, clarified once and for all the fact that the Father and the Son do exist, as separate and divine Beings, and that they live, and that they love me, and that they love you! How marvelous, oh how marvelous, for They live! And it is my testimony that Christ will show unto you, with power and great glory in a future day, that Joseph Smith was and is His prophet. “Joseph, this is my Beloved! Hear Him! Oh, how sweet the word…Oh what rapture filled his bosom, for he saw the living God! Oh Divine Redeemer! Oh Beloved, and Divine Redeemer!” Of this I bear my witness, in the sacred and holy name of Jesus Christ, amen.