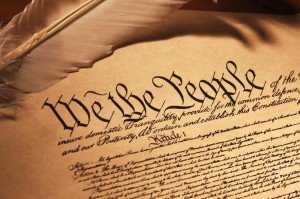 Tyranny. If I give the great majority the text book definition, they will little understand it. They will not believe my words except they begin to feel it. They will not believe tyranny is in the offing until it is too late. It is the old tale of the frog set in a pan of cool water placed on the stove. The water heats gradually, with the frog little noticing that he is boiling to death. Thus it is that the great majority of people little notice the approach of tyranny, ascribing any warning of such to political skulduggery. In a great and marvelous republic such as ours, tyranny can come only with stealth, lest a free people be aroused and come to their senses. Consider, for instance the case of Mike and Chantell Sackett, who were in the process of building a home on their small lot. Construction was underway at much cost to the Sacketts. Trees and shrubbery had been planted, in keeping with area greenery. Then the Environmental Protection Agency came calling, and determined that the their lot was a “protected wetland”. At great cost, apart from the extensive monies already invested, the Sacketts were ordered to remove all the work then completed, to include newly planted trees and shrubbery. But the EPA held out some hope; they would review the case. Unfortunately any review to decide whether the Sacketts be allowed to use their property would take several years! In the meantime, any attempt to use their own property in violation of the EPA decree would result in daily fines greater than the worth of the property! When any government entity has such power over hard working and very average citizens, do we not begin to recognize tyranny for what it is? An appeal? Certainly! The crushing reality is that court after court refused to fault the EPA, and court fees were staggering. In the meantime, the EPA was arrogantly mandating that the Sacketts take unwanted environmental actions, all this at cost to themselves as property owners. When free citizens of these United States can no longer turn to the courts for relief against their government, is this not tyranny? The God inspired wisdom of the Founding Fathers is demonstrated in the United States Constitution, the supreme law of this great nation. Consider the brilliance of the doctrine of the separation of powers, which doctrine is embodied in the first three articles of that inspired document. The President represents the Executive Branch. So great was the fear of the Founding Fathers that a tyrant should rise up in the Executive Branch, that two other branches were created, to provide a check against such a despot. The branch of the Judiciary or Supreme Court, and the Legislative Branch of a Congress elected by the people were to provide the checks and balances against the possibility of the Executive assuming the role of a king of this great nation. Should we have been alarmed when the President took it upon himself to rebuke the Supreme Court Judges as they sat before him as honored guests, during his State of the Union Address in January of 2010, to the applause of some members of Congress? With the understanding that the Founding Fathers placed so much importance on the separation of powers to prevent the rising up of a tyrant, have we not reason for alarm when the President arrogantly states that he will override the Constitution and the checks and balances it provides? “We’re not just going to be waiting for legislation…I’ve got a pen, and I’ve got a phone… I can use that pen to sign executive orders and take executive actions and administrative actions..Where Congress isn’t acting, I’ll act on my own…” Yes, there is cause for concern. At this time, we would do well to heed the words of Ezra Taft Benson, former Secretary of Agriculture and Church leader, who began by quoting Jefferson. “Thomas Jefferson said, ‘The price of freedom is eternal vigilance.” Mr. Benson then continued, “The price of freedom is also to live in accordance with the commandments of God…(and) I think the Lord expects us to take an active part in preserving the Constitution and our freedom.” And from former Constitutional Scholar and Ambassador to Mexico, J Reuben Clark, “I say unto you with all the soberness I can, that we stand in danger of losing our liberties, and that once lost, only blood will bring them back.”
True to our flag, by land and by sea
Long may it wave for you.
May never traitor’s touch pollute
Those colors of the sky;
We want them pure, to wrap about
Our heroes when they die! (Aldrich)
That we may apply the balm of repentance where needed, that we might be right with the Lord, and, while there is yet time, may we work to preserve our liberties, for ourselves, and for those we love, is my prayer, in the sacred name of Jesus Christ, amen.